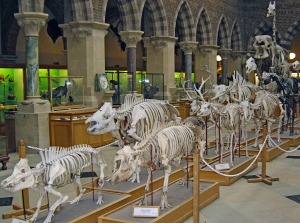 Background: One of the fundamental questions in ecology is “what drives changes in the numbers of species in time and space?” We can look around us today and see that there are generally many more species in the tropics than nearer the poles. However, another way in which we can look around ourselves is to delve into the fossil record to look back in time. Dani Fraser is a PhD student at Carleton University working on large-scale patterns in fossil mammal biodiversity. Dani was interested in looking at spatial patterns and how they changed through time, but rather than just calculating the number of animals living in each area at each time, we looked at the rate at which the communities changed as we moved further north. The idea is that when climates are relatively stable and warm there is little variability in climate and so there is gradual change in species as you move north. However, as the climate becomes more polarised (i.e. colder at the pole relative to the tropics) the rate of change in animal communities becomes more pronounced.

What we did: We looked at extinct mammals in North America during the Cenozoic (36 million years to the present) and showed that there was greater variability in species between regions when mean annual precipitation was lowest. This is consistent with theory, which suggests that when precipitation is (on average) higher communities are more similar to one another as you move north. We then looked at what might be expected from current mammal species under climate change. We used climate models to predict where these species might occur in the future and saw little evidence of the precipitation relationships that we found in the fossil data.

Importance: Much of the work done on biological responses to climate change has focused on temperature, looking at the number of species in each area, and purely ecological responses (i.e. over short time periods). We demonstrate that precipitation can also play an important role in driving responses to global climate. We also show that it isn’t just the number of species that changes in space but the relationship between communities: there is a greater rate of turnover (a greater dissimilarity) in communities as well. Finally, we show that these relationships seem to be present in the evolutionary record but cannot be predicted from the ecological responses of current mammals, suggesting that the patterns we saw in the fossil record are due (at least in part) to evolutionary processes that are not incorporated into climate models.

This is part of a series of short lay summaries that describe the technical publications I have authored.  This paper, entitled “Mean annual precipitation explains spatiotemporal patterns of Cenozoic mammal beta diversity and latitudinal diversity gradients in North America”, was published in the journal PLOS ONE in 2014. You can find this paper for free at the publisher’s website.