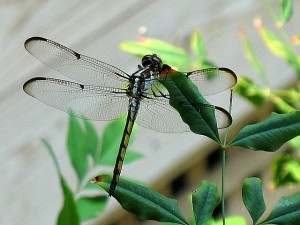 Background: Odonata (dragonflies and damselflies) are an ancient order of insects. By this, I mean that they have remained largely unchanged since their ancestors evolved 500 million years ago.  They have a fairly unique flight style which is a product of the configuration and use of their wings. Wing length has been used as a measure of odonate body size for many years, but wing shape has received less attention.

What we did: I was interested in whether wing shape varied with latitude in the UK.  The populations living in habitat in the UK are exposed to a range of temperatures depending on location and it might be that certain wing shapes confer advantages in certain habitats. Based on a survey of seven populations of Coenagrion puella, I compared wing shape using a method called “geometric morphometrics”.  This allowed me to look at shape independently of the size of the wing.  I found that the wing shape in the majority of populations was very similar.  All populations in the south of England were comparable, but the populations in the south of Scotland showed a progressive shift away from this “typical” wing shape until a site near Edinburgh which was significantly (if subtly) different.

Importance: Wing shape has been highly conserved throughout odonate evolution (i.e. ancient odonates are similar in shape to present-day odonates). Because even small variations between species are consistent, wing shape and patterns of wing veins have been used to identify species. My study showed that these wing shapes were not as consistent as people had previously thought and that there might be ecological or evolutionary processes that can cause significant variation.

This is part of a series of short lay summaries that describe the technical publications I have authored.  This paper, entitled “Wings of Coenagrion puella vary in shape at the northern range margin (Odonata: Coenagrionidae)”, was published in the International Journal of Odonatology in 2008. You can find this paper online at the publisher, or on Figshare.