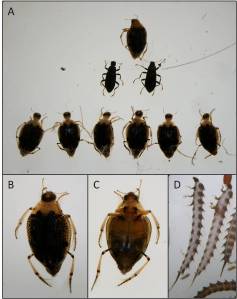 Background:  Ponds have been identified as a very important habitat in the landscape.  They enhance regional biodiversity, help control floodwater, reduce pollution in run-off from agricultural and urban land, and provide greenspace and biodiversity in urban environments.  However, because of their small size (typically less than two hectares), they have been neglected by scientists until the last couple of decades.

What we did: This study used a large dataset of 454 ponds that had been surveyed in the north of England to identify all of the invertebrate and plant species that inhabited them. A wide range of physical, chemical and biological variables were also measured and, as the title of the paper suggests, we investigated which of these variables were related to the species richness of different plant and animal taxa. We were able to predict a reasonable amount of the diversity of invertebrates in general, but predictions varied between groups of invertebrates. In general, more shade and a history of drying up reduced the diversity of all groups.

Importance: It has been shown that landowners and managers tend to manage ponds and other natural resources using “received knowledge”. in other words, there is little evidence base for such management.  Our study demonstrated a few important relationships which can be used to inform this kind of management.

This is part of a series of short lay summaries that describe the technical publications I have authored.  This paper, entitled “Environmental correlates of plant and invertebrate species richness in ponds”, was published in the journal Biodiversity and Conservation in 2011. You can find this paper online at the publisher, or on Figshare.