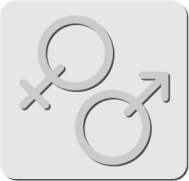 This is becoming something of a cottage industry recently – it is fairly straightforward to calculate the gender ratio of presenters at academic conferences and to evaluate that ratio against some theoretical baseline. However, these sorts of questions are important to look at because the work is highly complex and so requires a large number of people looking at the diverse kinds of conferences to provide a bigger picture. A number of previous studies have shown a range of different patterns in gender and academic conferences (references at the bottom):

This is by no means an exhaustive list of these studies, and the recent dates of their publication highlights the fact that the academic community is becoming increasingly aware of the issues with skewed gender ratios in conferences.

So here is my small contribution for the European Congress of Entomology, held in York in August 2014. I haven’t seen any statistics for this particular conference so I thought I would try to produce some headline stats and make the data available (here) for anybody who wanted to do a more thorough job. The ECE had 49 symposium sessions with a total of 336 talks. I won’t consider the poster presentations because (i) there were a lot, and (ii) many of the names were not familiar to me and so it was time-consuming attempting to specify the gender of the lead author (yes, I’m lazy). There were three kinds of talk: a 60 minute plenary which was a whole-conference talk, a 30 minute plenary which opened most (but not all) of the symposia, and 15 minute talks which formed the bulk of the presentations. I reckon I can guess 328 out of 336 lead author genders based on names, but bear in mind I am fallible… Here’s the breakdown based on that tally: 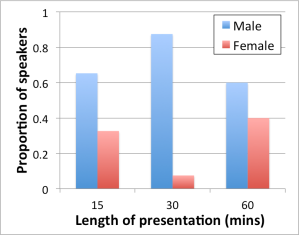 What is interesting is that there is a clear difference in the gender ratio between the three talk types. Plenary talks are closest to parity at 60% male (although relatively few in number), 15 minute talks are similar at 65% male, but the 30 minute mini-plenaries were 88% male. Arguably 3:2 might be a reasonable gender role given the gender ratio of researchers in the field (I have no data on that, but I imagine that the RES has basic data on members?). Suffice it to say that because we don’t know what the general ratio is, it isn’t possible to perform any statistical tests because we can’t formulate a null model.

However one testable hypothesis is that the presence of female organisers among symposium chairs enhances female representation among speakers. What we find here is that there doesn’t seem to be any effect of female organisers on female representation on symposia. First, the percentage of speakers in each symposium who are male is not significantly related to the presence or absence of women as chairs in the symposium (W=188.5, p=0.511). Second, there doesn’t seem to be any effect of women organisers on female 30-minute plenary speakers. The numbers of female speakers are too low for a chi-squared analysis of presence/absence female speakers vs presence/absence female organisers, but 1/8 (13%) were female when women were organising, while 5/31 (16%) were female when women were not organising.

So it is clear that women gave fewer presentations at the Congress than men, but we don’t know how closely the ratio matches either the ratio of entomologists or the ratio of attendees. We see similar numbers of women and men giving both regular 15 minute talks and whole-conference, 60-minute plenaries. However, a large discrepancy appears when we look at the speakers asked to give the mini-plenaries at the beginning of each symposium. Interestingly, the presence of women among the organisers doesn’t seem to solve this, which runs contrary to evidence from previous studies (Casadevall and Handelsman, 2014).

Casadevall, A. and Handelsman, J. 2014. The presence of female conveners correlates with a higher proportion of female speakers at scientific symposia. MBio, 5(1), pp.e00846-13.