Background:  The management of water in urban areas can be a problem, because rainfall rapidly runs off impervious surfaces like pavements and roads. This means the water quickly enters rivers and streams, which then flood. City managers reduce the rate at which water enters rivers using stormwater management facilities, which often include ponds to hold back the stormwater. These ponds are usually managed just for water retention, but they could potentially form a very useful habitat for aquatic plants and animals in cities.

What we did: We looked at 20 of these stormwater management ponds (SMPs) to see how many animals and plants were using them. We also compared those 20 ponds against 10 other ponds that were not used for stormwater management, but were found in roughly the same area. We showed that the water chemistry in the SMPs was often high in salt, and that the amount of salt in the ponds was related to the amount of urban land cover (which makes sense: much of the salt would have been road salt washed in during snow melt). However, despite some differences in water chemistry there were no significant differences between the SMPs and the other ponds in the diversity of animals. We conclude that it is not the management, per se, that affects the ponds, but the landscape within which they are found.

Importance: Management of particular habitats frequently has to prioritise one function over another. Stormwater management is a major concern in many areas, and so there may not be much willingness to detract from the role of ponds in managing run-off in order to benefit biodiversity. We showed that this may not be necessary: if the ponds are in a relatively low-intensity urban area then they may contain high biodiversity regardless of management.

This is part of a series of short lay summaries that describe the technical publications I have authored.  This paper, entitled “Stormwater ponds can contain comparable biodiversity to unmanaged wetlands in urban areas”, was published in the journal Hydrobiologia in 2014. You can find this paper at the publisher’s website.

Presumably as the result of in-depth clinical trials (how else would they know that their treatments can cure so many severe and varied diseases and conditions?) the experts at the Correactology Centres (which I have discussed before) have removed “cancer” from the list of “ailments” that Correactology can treat.  A quick scan from an archived version of their “Ailments Treated” page from 4th November 2007 shows 127 ailments, but that list on the current version of the page is only 126.  In case you are wondering whether I am serious, I want to be absolutely clear that a PubMed search for “Correactology” produces zero results.  The removal of cancer from the list was an edit to the website, rather than a contribution to scientific research.  There have been no trials.  There are no datasets.  There are anecdotes and testimonials that score very low on the evidence pyramid.  Nevertheless, Correactologists take money from patients, claiming to be able to treat all kinds of diseases.  I will leave you to browse their (wish) list at your leisure, but I wanted to highlight a couple that are particularly unpleasant: END_OF_DOCUMENT_TOKEN_TO_BE_REPLACED 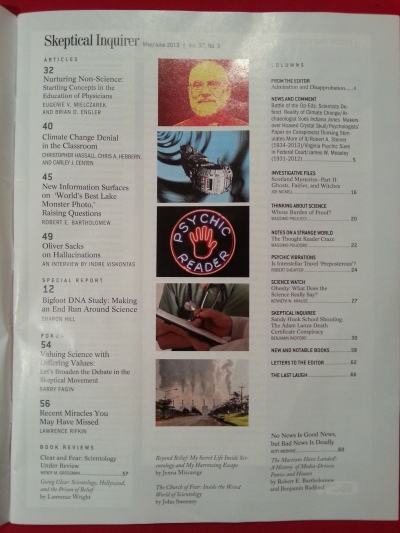 The Skeptical Inquirer piece on climate change denial in universities that I wrote (along with my co-conspirators) has just been published in the May/June 2013 print edition!  It’s a bit strange to be listed alongside people like Ben Radford, Sharon Hill, Joe Nickell, Massimo Pigliucci and Massimo Polidoro, but we’re all delighted that Ken Frazier and the rest of the SI team saw enough value to accept our little piece.  Many thanks to them all for a smooth and efficient editorial process.  I’m afraid that there’s no online version yet (they don’t publish all the print articles online, and those that they do publish online come along a month or two after the print edition) but I’ll post a link if/when it does appear.  All the more reason to go and subscribe to the print version!

This is my third post relating to a project that looked at climate change denial as it was being taught in a Canadian university (see here for background, and here for response to some criticism).  We were expecting the skeptical community to pick it up, and the report was written mostly for that audience.  What we were not expecting was international media coverage and a few dozen blog posts.  Here, I will briefly reflect on what the media contact was like.

END_OF_DOCUMENT_TOKEN_TO_BE_REPLACED

This is my second post on the climate change project (see my earlier piece on the background to the story).  In this post I’ll talk briefly about some of the negative response that was raised to the project, primarily by the researcher who developed the course, Tim Patterson.  It is worth noting that the course is being taught again in January 2013.  I’ll follow this up with posts on (i) experiences with the media, and (ii) advice for skeptical campaigns in general.

END_OF_DOCUMENT_TOKEN_TO_BE_REPLACED

I was lucky enough to be invited on as a guest presenter on The Reality Check, one of Canada’s largest skeptical podcasts.  I recorded a couple of shows before I left Ottawa and it was immensely fun and interesting.  I had made fairly extensive notes for the segments, and it seemed a shame not to post them here. END_OF_DOCUMENT_TOKEN_TO_BE_REPLACED

It was recently brought to my attention that there has been some (subversive?) editing on the Carleton University Wikipedia page (click to enlarge):

So, I have been following PZ Myers’ blog at Pharyngula for some time and it always makes me smile when he comments on some of his email correspondance. Well, I had a bit of a mention in a news story last weekend which looked at the control of feral cat populations (see the Ottawa Citizen article). As a result, I received the following email:

END_OF_DOCUMENT_TOKEN_TO_BE_REPLACED

I had the pleasure this evening of introducing Prof Root Gorelick to give a lecture to the local Centre for Inquiry group here in Ottawa.  I have seen him give a number of relatively provocative talks at conferences and I knew his engaging style and fascinating subject matter would make for an interesting evening.  Some people have asked me to summarise the talk as they couldn’t make it, so here is my best attempt while it is still fresh in my mind…
END_OF_DOCUMENT_TOKEN_TO_BE_REPLACED