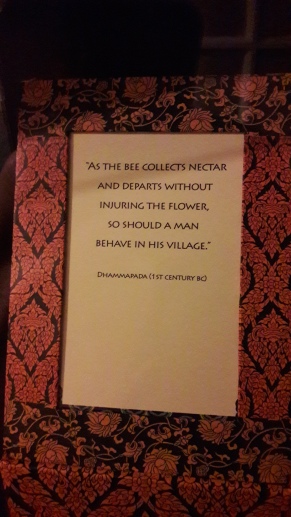 Walking home after a few drinks on New Year’s Eve, I spotted a small sign in a shop window. The text says:

“As the bee collects nectar and departs without injuring the flower, so should a man behave in his village”

Two things sprang immediately to mind. The first was the tendency that we have to attribute greater emphasis to quotes from older civilisations, despite the fact that those civilisations are less developed. Older civilisations are not wise like older people – they are actually younger in an absolute sense (as pointed out by Eliezer Yudkowsky). It is as if being from a time far distant to our own confers wisdom that we perceive lacking in contemporary society.

However, the second thing that occurred to be was that “that’s not how bees work”… Pollination is a mutualism most of the time, but not always. By offering a nectar resource in exchange for the transfer of pollen, flowers have evolved relatively straightforward paths to that nectar for their respective pollinators. Sometimes that is a big, open flower that can be accessed by many species, but other times the flower has a peculiar shape or the nectar well is particularly inaccessible. The latter cases often result in very specific species that are able to access the nectar using particular behaviours or very long tongues.

However, whenever a task is set in nature, there is always the incentive to “cheat”. Hence we have a suite of species who are (at least some of the time) “nectar robbers” like the bumblebee below. Note how the bee is biting through the base of the flower to suck out the nectar, rather than trying to insert its tongue into the opening.

And nectar robbing isn’t rare, either. Where they cannot access the nectar through the “conventional” route, bumblebees can rob nectar from almost all flowers of a particular species in a patch. More recent work has suggested that plants have evolved defences against nectar robbing, such as the UV “guidelines” on flowers that guide bees to the opening of the flower.

This is one specific instance of a situation in which nature has appeared harmonious at first glance, but underneath is a sea of evolutionary battles between species. Perhaps the best-known reversal of public opinion on a biological idea was the dunnock. Professor Nick Davies at the University of Cambridge has worked on this species of bird for a number of years, and opened one of his books with the following quote:

“Unobtrusive, quiet and retiring, without being shy, humble and homely in its deportment and habits, sober and unpretending in its dress, while still neat and graceful, the dunnock exhibits a pattern which many of a higher grade might imitate, with advantage to themselves and benefit to others through an improved example.”

You can probably see where this is going… Contemporary genetic techniques revealed in the 1980s that, rather than being a coy and faithful bird that formed long-term pair bonds, there were all kinds of hanky panky (that’s the technical term) going on in the hedgerows. The work made an important point about sexual selection: animals tend to evolve to do what is in their best interests, and cheating (at least occasionally) is often among the best choices. So next time you wonder at the peace and harmony that you see in nature, remember that all you are seeing is covert warfare interspersed with occasional cease-fires!