For those of you not familiar with Cordyceps fungus, that’s the one that attacks insects (and other arthropods) by infecting and then spreading through the whole body. The result is something like what you see below: 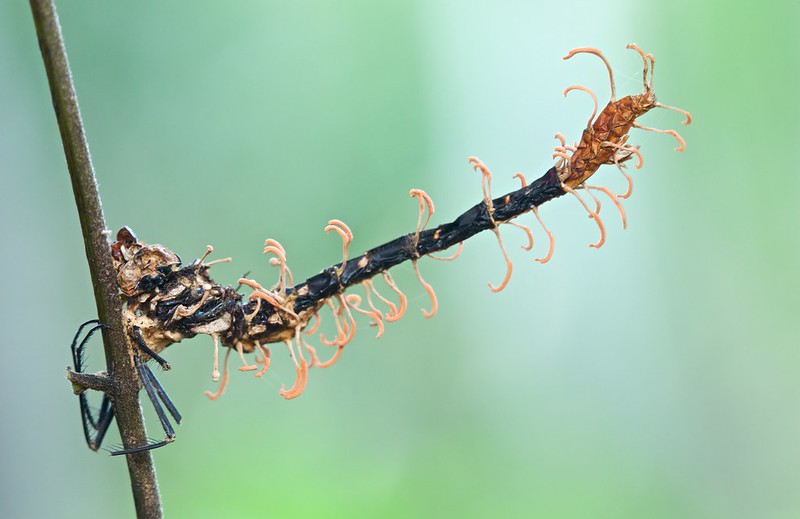 Each one of those little growths is a “fruiting body” and that is where the fungus releases its spores in order to found new patches of fungus. The most famous of these kinds of fungi is perhaps Ophiocordyceps unilateralis, which infects ants and influences their behaviour. The fungus forces an ant to climb a blade of grass or a twig and then attach there until it dies. Meanwhile the fungus produces a series of fruiting bodies that release spores from the new vantage point – the height helps those spores to disperse a greater distance. Apparently fossilised plants from 50m years ago also bear the marks of these Cordyceps-related attachments by insects, suggesting that this is an old battle.

What we don’t know is the extent to which Cordyceps influences the behaviour of other hosts. I posted the image above because it is the first time that I have seen a dragonfly infected in this way. It would make more sense (to me, at least!) for Cordyceps infecting a dragonfly to make it fly upwards while the fruiting bodies are releasing spores to broadcast those offspring as far as possible. However, the only image I have seen is this one where the animal is firmly rooted to the perch.

If it was a parasite that affected dragonfly flight then it wouldn’t be the first. A few recent studies (e.g. Suhonen et al. 2010) have suggested that dragonflies infected with parasitic mites that cling to the outside of the animal result in greater movement. It has been suggested that this could be an attempt to get out of an area with a high parasite population – after all, that’s not a great place to raise your little dragonfly family. However, we think this response has evolved to help the host and not the parasite, which is the opposite to the response elicited by the manipulative Cordyceps.

One thought on “Dragonfly mind control?”