I am fascinated by the field of “biomimetics” – attempting to find solutions to problems by looking to the natural world. Sometimes this involves buildings that work like termite nests, swimsuits that use tiny hooks like those found on shark skin, or Velcro that uses the same principles as seed burrs as an inspiration. However, among the most celebrated examples of biomimetics are those involving flight. 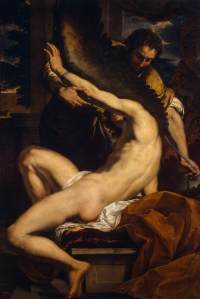 There have been a great many legends describing early attempts at flight, with perhaps the most famous being that of Daedalus and his son Icarus. Daedalus created the Labyrinth on Crete for King Minos and the king imprisoned Daedalus in a tower so that he could not spread the knowledge of labyrinth-building to other kingdoms. Daedalus escapes with Icarus, but Icarus flies too close to the sun causing the wax holding his feathers melts and he falls into the sea and drowns. Daedalus, meanwhile, reaches Sicily (750km away). Ovid’s description of the myth states that Daedalus “…flexed each [feather] into a gentle curve, so that they imitated real bird’s wings”, and so this is clearly a calculated (if legendary) attempt to mimic bird flight.

A less-legendary attempt at flight was made successfully (if unwillingly) by Yuan Huangtou of China in 559AD. Yuan Haungtou was a political prisoner, condemned to death by the Emperor of Northern Qi. The Emperor was fond of toying with local traditions and, as a mocking gesture towards adhering to local Buddhist customs involving the release of captive animals, attached several prisoners to bird-shaped kites and made them jump from the top of a tower. Only Yuan Huangtou survived, having cleared the city walls, but he was promptly executed.

The next two accounts are somewhat similar, and debate rages over whether either are accurate. Abbas Ibn Firnas was a polymath who lived from 810-887AD in what is now the region of Cordoba in Spain but which was then under Moorish control. Ibn Firnas is credited with a wide range of inventions and theories, as well as having been a physician, poet, and musician. Among the feats attributed to him was a single attempt at flight:

He covered himself with feathers for the purpose, attached a couple of wings to his body, and, getting on an eminence, flung himself down into the air, when according to the testimony of several trustworthy writers who witnessed the performance, he flew a considerable distance, as if he had been a bird, but, in alighting again on the place whence he had started, his back was very much hurt, for not knowing that birds when they alight come down upon their tails, he forgot to provide himself with one.

This account comes from Moroccan historian Ahmed Mohammed Al-Maqqari in the 1600s, though, and there is no other evidence for such a flight having taken place. 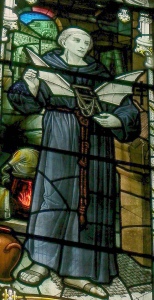 In fact, it is thought (although there is little evidence for this speculation) that the story of Ibn Firnas may have been inspired by another daring aviator: Eilmer of Malmesbury. Eilmer was a senior Benedictine monk at Malmesbury Abbey in southern England, and was an expert astronomer. However, he had been an impulsive young man and, inspired by the story of Daedalus, had attempted to fly from the top of a church tower:

He had by some means, I scarcely know what, fastened wings to his hands and feet so that, mistaking fable for truth, he might fly like Daedalus, and, collecting the breeze upon the summit of a tower, flew for more than a furlong. But agitated by the violence of the wind and the swirling of air, as well as by the awareness of his rash attempt, he fell, broke both his legs and was lame ever after. He used to relate as the cause of his failure, his forgetting to provide himself a tail.

A furlong is 220 yards, 660 feet or 201m, so that is quite a feat! Attempts to recreate the path of the flight suggest that he may have leapt from an 18m high tower in the monastery, but down a steep hill rather than into the town itself. Allegedly Eilmer was preparing for a second attempt, but was prevented from ever flying again by the Abbot of Malmesbury. A short film has been made about Eilmer’s exploits (although it is not yet released), which attempted to recreate his wings in all their glory:

As can be seen from the stories of Ibn Firnas and Eilmer, there has been a long-standing interest in flying like birds. This interest is still seen today in the huge quantities of academic research on animal flight (creating robots like jellyfish, flies, dragonflies, and birds) and events like the Redbull Flugtag, where enthusiasts following in Eilmer’s footsteps (or should that be “flightpath”?) vie to better one anothers’ record distances.  Here, for example, is the current Flugtag record holder reaching a distance of 258 feet (for reference, that is only around 1/3 the distance apparently covered by Eilmer!):