“Background matching” is the most typical form of camouflage – if you look like your environment then you are less likely to be noticed.  However, this has two drawbacks: (i) you can’t move to another environment because you won’t be camouflaged any more, and (ii) you can still be spotted because your outline will not necessarily mesh with your background.  One solution to both problems is “disruptive colouration”.  This process, first described by Abbott Thayer in a book in 1909, involves patches of pigment across an animal’s body, such that the edge is broken-up when seen against the background.  It was thought that this reduced detection of an animal by reducing the detectability of the outline, and that the concept would work whether the animal matched its background or not.  Below are some classic examples of disruptive colouration: 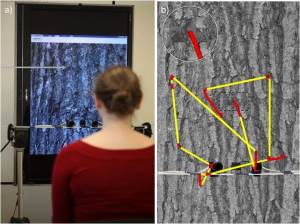 We tested this theory using human participants hunting for computer-generated moth targets on images of trees. The moth targets varied in the degree of background matching and disruptive colouration, and by looking at the numbers of moths of each pattern that were detected we could infer the protective role of that particular pattern.  However, a key step forward was the incorporation of eye-tracking technology.  We tracked the eye movements of each human participant so that we knew exactly where they were looking (the machine recorded eye location 60 times per second!) so we knew when people were looking at the moths but not seeing them.  When we looked at the number of times people passed over targets, and the amount of time taken to finally “attack” the target after finding it (i.e. the delay before finally recognising a moth), these also increased significantly with the edge pattern of the target.

From all of this we can conclude that disruptive colouration is independent of background matching, and confers an advantage in terms of decreased detection and recognition of objects by visual hunters.  Ours is the first study to demonstrate this important mechanism, and could potentially have wide-ranging implications for the design of military camouflage.  We also provide one of the only uses of eye-tracking technology (an approach common in psychological research) in evolutionary biology, and I am certain that this will be an extremely valuable methodological advance moving forward.  If you have any questions, feel free to tweet them (@katatrepsis) or leave a comment below!

PS: Congratulations to the lead author, Dr Rich Webster, who successfully defended his PhD thesis a few days ago.