The Vancouver Sun has published a story on the result of an FOI request into academic misconduct in Canada. Apparently a Canadian professor was awarded an NSERC (National Science and Engineering Research Council) grant on the basis of an application in which he knowingly included made-up publications. This makes me angry.

For a start, there is a shrinking pool of funding and a growing pool of applicants for pretty much all sources of grant funding, including from NSERC.  I have demonstrated this below using data from the last five years (that’s the limit of the easily-accessible data from NSERC).  As you can see, 2010 represents not only the lowest success rate (58.1%) but also the lowest overall total grant given ($69.5m).  What this means is that you have to be (i) really good, (ii) really lucky, or (iii) both, in order to qualify for such a grant.  To have someone come in and claim some of that dwindling pool of money unfairly when some of us are flogging ourselves to death trying to scrape together funding, publications and collaborations is just a kick in the teeth. 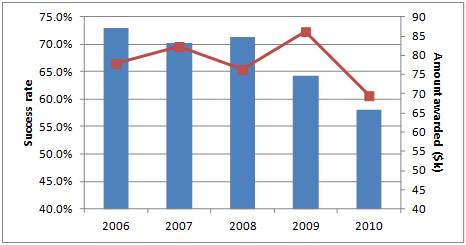 Second, as the article points out, he has young people depending on his (all we know is that it is a male professor) research funding to pay for their education.  I think NSERC managed this quite well – they removed the funding that was not directly supporting the students and postdoc in his laboratory to ensure that those who were innocent of crimes were not punished unduly.  He has an obligation to mentor these students and that does not just mean teaching them how to pipette.  He is an academic and pastoral mentor – someone to whom they should look-up and use as a model for their research career.

Finally, there is the issue of whether or not the identity of the prof should be made public.  NSERC has obviously stuck to its policy on this and not released any personal information apart from the appropriately-gendered pronoun.  My first instinct was that nothing would be gained from dragging his name through the mud, but on reflection I think perhaps he should be shamed.  Science occupies a precarious position in the public eye, with a large-scale anti-intellectual movement sweeping across large portions of the developed world (although concentrated in America).  Now is not the time to be shielding people from criticism.  We must have a full and frank discussion about what will and what will not be tolerated from our scientific leaders and make an example of those who would abuse the system for personal gain.