I have been involved in “climate space modelling” for a few years now.  This is an approach that uses observations of a given species to determine the range of environmental variables under which it will occur.  Once you know what the limits of its tolerance are, you can predict where the species will occur.  For example, let’s say that a damselfly (of course I’m using a hypothetical damselfly) can live at temperature of between 10 and 20 degrees and precipitation has to be between 200mm and 500mm per year.  Warmer, wetter, cooler or drier than that and it can’t survive.  We can use these limits to predict (i) where the species currently exists but has not been recorded, and (ii) where the species might exist in the future as the climate changes. 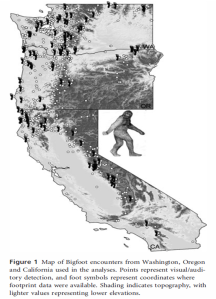 These climate models have been used for many different taxa, but recently I came across the first example of such a model being applied to a cryptid.  “Cryptid” is the name given to any postulated species that has not been conclusively documented.  Notable examples include the Loch Ness Monster in Scotland and the Chupacabra in Mexico.  This study used a database of Sasquatch sightings from the western USA to infer the climatological requirements of this particular cryptid.  The point of the study was to demonstrate that researchers can provide apparently meaningful data without any actual biological understanding of the concepts.  In this case, we have little or no evidence of the existence of Sasquatch, and yet the researchers published an entire paper documenting its distributions. 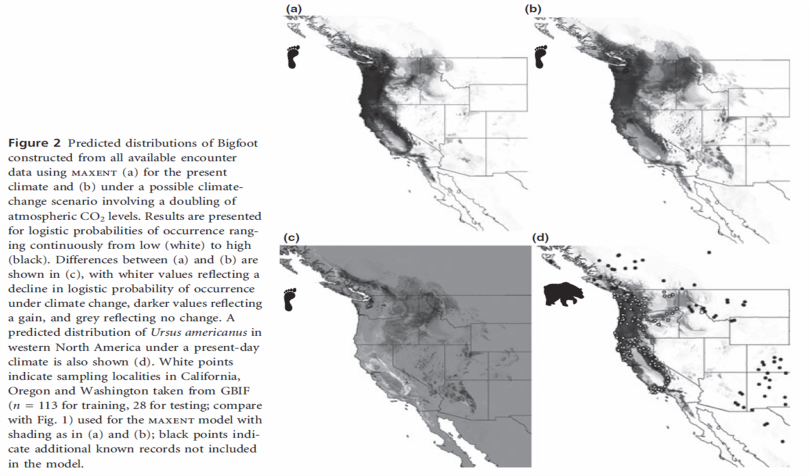 However, rather than stopping at this facetious point (it was a paper published on April Fool’s Day), the authors compare the predicted distribution of Sasquatch with that of the black bear, Ursus americanus, using records from same area in which Sasquatch has been sighted.  The overlap in distributions is marked and suggests that sightings of Sasquatch, a large, hairy, bipedal animal living in the forest, are mistaken sightings of the black bear, a large, hairy, sometimes bipedal animal living in the same forest…  The authors conclude:

Although it is possible that Sasquatch and U. americanus share such remarkably similar bioclimatic requirements, we nonetheless suspect that many Bigfoot sightings are, in fact, of black bears.

8 thoughts on “In search of Sasquatch”